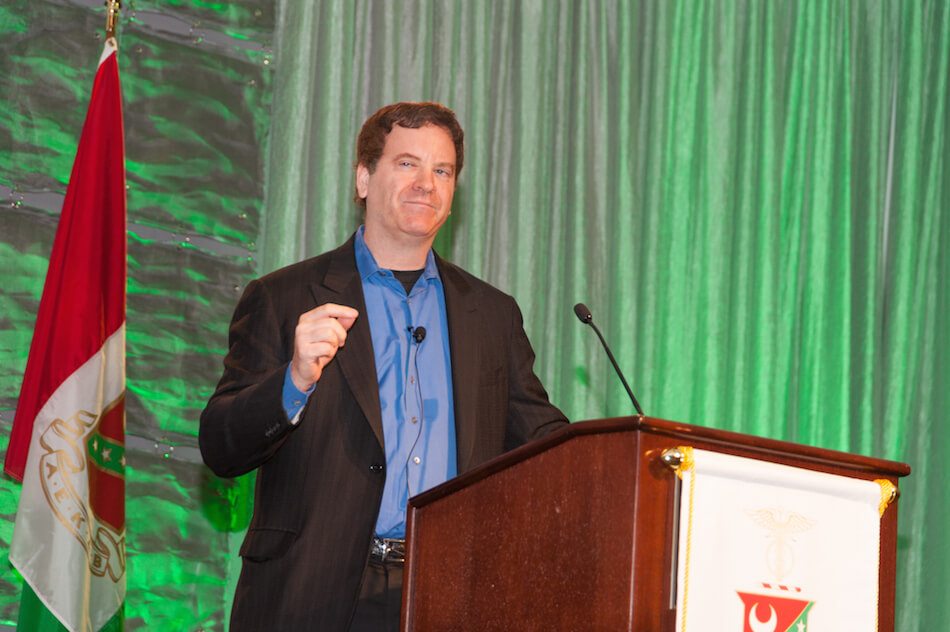 By Chrys V. Nikopoulos
“I do think in life you get out what you put into it, and I put a lot into my Kappa Sigma experience as an undergraduate,” said Brother Todd R. Wagner (Beta-Theta, Indiana University, ‘80) in his keynote address at Kappa Sigma’s 2014 Leadership Conference in New Orleans. As an undergraduate, Brother Wagner served as Grand Master of his chapter and has remained well connected with the fraternity since graduating from Indiana University with a business degree in 1983.
Brother Wagner later attended law school at the University of Virginia in Charlottesville, Va., and would subsequently move to Dallas to become a licensed Certified Public Accountant (CPA), and be admitted as a partner with a major law firm in Texas. In 1995, Brother Wagner left the legal world and joined up with fellow Indiana University alumnus, Mark Cuban, to successfully launch AudioNet – a new venture broadcasting live sporting events and radio stations over the Internet with only a Pacard Bell 486 PC. The two were pioneers in their field and were able to harness the power of the World Wide Web to share media across the globe.
As Chief Executive Officer of AudioNet, Brother Wagner expanded the company and remained focused on offering more services to potential clients. In 1998, Wagner and business partner Mark Cuban changed the name of the thriving company to Broadcast.com, and took the company public in the midst of the dot-com boom of the late 1990s. The Broadcast.com initial public offering (IPO) set an opening day record with shares climbing nearly 250% from their initial offering price of eighteen dollars. In 1999, Wagner and Cuban sold Broadcast.com to Yahoo! for $5.7 billion. Wagner stayed on after the acquisition, and continued to lead the business as a division of Yahoo! until mid-2000 when he declined an offer to become Yahoo!’s Chief Operating Officer to focus on other endeavors.
Even with all of the success Brother Wagner has earned in the areas of business and technology, his true passion has been giving back to others and being a valuable member of his community. The Todd Wagner Foundation was launched with the goal of implementing Wagner’s vision of “venture philanthropy” and the Foundation has invested tens of millions of dollars to date in cutting-edge programs that empower underserved communities and at-risk youth. The Foundation’s signature program is MIRACLES, a structured after-school program focusing on technology, education and life skills for children in grades 6-12.
Brother Wagner is also passionate about giving back to the Fraternity and was named the 2003 Kappa Sigma Man of the Year for his success in business, and his philanthropic efforts across the globe. More recently, Brother Wagner joined the members of the Supreme Executive Committee in Pittsburgh during their quarterly meeting to introduce his latest project – Chideo. As the web’s first interactive charity broadcast network, Chideo is focused on raising money and awareness for worthy causes via exclusive video content.
Kappa Sigma was fortunate to have Brother Wagner as the keynote speaker at the 2014 Leadership Conference in New Orleans, Louisiana. In addition to sharing his thoughts on business, success, and making it to the top, Brother Wagner took questions from Kappa Sigma undergraduates and volunteers in the audience. However, before speaking, Brother Wagner surprised the brothers in attendance with a gracious $100,000 donation to the Kappa Sigma Endowment Fund.
Brother Wagner began his keynote address to a full house of Brothers from across the eastern half of North America by reflecting on his days as an undergraduate, and speaking about his term as Grand Master of the Beta-Theta Chapter at Indiana University. “I was GM when I was an undergrad, and I always say that if you can get your own peers to listen to you, you can do anything after that,” said Brother Wagner. “When you’re 21 years old, and it’s just your Brothers in that room, they don’t have to listen to you. The lessons that I learned from that, of how to hopefully lead people, of how to hopefully say things that people wanted to listen to – I learned a lot from that,” added Wagner about his experience as GM of his chapter.
“What Kappa Sig does better than anything… is train young people to understand that we are all part of this together, that leadership is an incredible component, but so is giving back,” replied Brother Wagner in response to an audience question during the Q&A portion of his keynote address.
He also shared stories from his days as a law student at the University of Virginia and noted that “success in life is about being a decathlete: being able to do a lot of things pretty well. You may not have the best high jump, you may not have the best hundred time, but you’re able to pull it together. And that to me is what leadership is; that’s what I know this conference is about, and that’s what I think Kappa Sigma teaches all of us.”
Brother Wagner highlighted the determination it took for him to quit his first job as a young attorney in Dallas, and venture out on his own to follow his dream of becoming a full-time entrepreneur in the emerging Internet industry.
“I always say that success is the four-way intersection of luck, timing, hard work, and smarts – and I think that they all have to come together for something really amazing to happen,” shared Wagner in discussing the challenges and rewards of entrepreneurship. “Everybody likes the 5.7 billion part of the [Broadcast.com] story, but there’s a lot of the story before that” reflected Wagner as he discussed the personal risk and financial investment he made in developing the company from the ground up. “There is nothing more illuminating in life than when everything’s on the line, and I had, if you will, everything to lose and everything to gain all at the same time… I call those years the ‘all I did was work and sleep years’”, added Wagner.
In talking about the host of celebrities and world-renowned names that he has had a chance to work with, Brother Wagner shared a thought about these seemingly “lucky” individuals – “I almost never meet these ‘lucky people’; instead I meet these people that have worked very hard, that work around the clock… Be it Clooney, or Bradley Cooper, or Jennifer Lawrence, or any of the people that I’m fortunate enough to come across, those are the similar components.”
“Throughout life, you are preparing yourself for left and right turns. You are preparing yourself to be that decathlete that is ready to go where it takes you and seize that opportunity,” noted Brother Wagner in his closing remarks.
Brother Wagner’s wife, Kari, shares his passion for service and founded the Prayer Canvas USA: America 4 Boston project after the tragic Boston Marathon bombings. Kappa Sigma supported the grassroots project and proudly displayed a prayer canvas at the 2014 Leadership Conference in New Orleans.
Brother Wagner’s keynote address at the 2014 Leadership Conference concluded with Worthy Grand Master Hugh M. Robert (Epsilon-Mu, University of Tulsa, ‘95) presenting Brother Todd Wagner with the fraternity’s Diamond Crest recognition pin for McCormick’s Circle, which recognizes brothers who have given over $100,000 to the Order. Brother Wagner’s McCormick’s Circle pin was given for donations prior to his $100,000 gift announced at the Leadership Conference. Brothers from across the country enjoyed the insightful keynote address and appreciate Brother Wagner’s generosity and willingness to continue serving the Fraternity.
View Brother Wagner’s Speech: