Stephen Alonzo Jackson is regarded as possibly the most important man in Kappa Sigma’s history. Through his singular ambition, while a student at the University of Virginia to transform a struggling local fraternity into a strong national organization, Jackson fashioned our Ritual, wrote the Constitution, and was elected our first Worthy Grand Master. 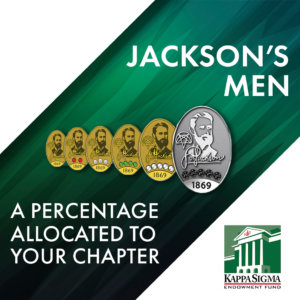 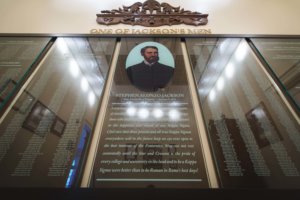 “His love of the Fraternity knew no bounds, and his enthusiasm was so contagious that it influenced everybody who came within his reach.” Born September 22, 1851, this esteemed forefather was left motherless in infancy and was raised by his grandmother. During the Fraternity’s second Grand Conclave in 1878, Jackson expressed his idea of an enduring and expanding brotherhood as he address the Order: “May we not rest contently until the Star and Crescent is the pride of every college and university in the land,” and to that end Jackson worked day and night to the end of his busy life.

Jackson’s Men is the Endowment Fund’s most popular and innovative giving recognition program. A percentage of all donations received to this program will go to your chapter scholarship fund. The six-tier program honors contributors committing to gifts between $1,000 and $25,000, payable at once or over time. Upon completion of the pledge, each of Jackson’s Men receives a handsome, individually numbered pin that represents his unique emulation of Jackson’s lifelong devotion to Kappa Sigma.

Consider pledging to become one of Jackson’s Men today to help continue the tradition of excellence of Kappa Sigma and support for your chapter.

A percentage of your pledge will be directly allocated to your chapter scholarship fund. To upgrade your current Jackson’s Men pledge, please contact Kyle Somers at (434) 262-4010.

Become one of Jackson’s Men Today! If you would like to sign up to become One of Jackson’s Men, please complete the online form below, or you can mail a check to the Kappa Sigma Endowment Fund, at 1610 Scottsville Rd Charlottesville, VA 22902.

If you would like to upgrade your current level Jackson’s Man, please contact the Endowment Fund at (434) 979-5733 or email [email protected], and they will be happy to help you set up your pledge and payment terms.